A Break For Us Too

I haven't posted in a while because I've had something on my mind, and it involves quite possibly one of my most favorite things in the world... a change.  (That was sarcasm.)

I think I'm going to take a break from writing Us Too so I can attempt to continue working on a possible book.  This idea has been sitting in the back of my mind since I read the amazing book:  Beautiful Boy -A Father's Journey Through His Son's Addiction.

I have no idea what this will entail, how long it will take, if it will happen, or if I have what it takes, but I'm going to give it a try.  I figure, why not?  The possible title is:  A Beautiful Girl's Beautiful Mind- A Mother's Journey through Her Daughter's Mental Illness.

Thank you so much for reading Us Too and following our journey. I have truly appreciated every "like" and comment, and I hope our story has helped others better understand, and have more empathy for, those who struggle with mental illness.

Thank you and until next time...

We finally met with Jordan's high school counselor and he gave us information about a 504 plan which I learned is:

"a plan developed to ensure that a child who has a disability identified under the law and is attending an elementary or secondary educational institution receives accommodations that will ensure their academic success and access to the learning environment."

He told us it would "help to even out the playing field for Jordan."  I feel very fortunate that he chose to phrase it this way. It helped to ease the blow of hearing the word "disability", which  really hit me hard. What do you mean Jordan is disabled? But then I reminded myself of Jordan's past struggles, and that a chemical imbalance is, in actuality, physical. It's like being blind or needing a wheelchair.  (Is it really?)

I was thankful and relieved that Jordan would begin getting any accommodations necessary and that we had full support from the high school.  This was a big deal.

Hope was on the horizon! 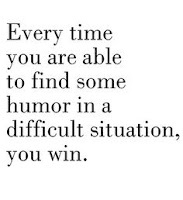 A short conversation I had with Jordan in October of 2012:

Here's the short, much needed explanation:

The transmission went in our van, the printer died, Kevin got a concussion at football practice, Adam's dad went in for heart surgery, and Jordan lost it because she was afraid she would fail honors Biology.

I guess on this day, we won.

Dermatillomania, The Struggle is Real 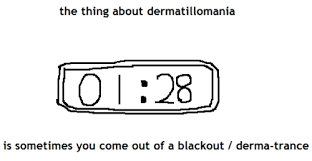 It's interesting thinking back to when Jordan began struggling with her Dermatillomania.  I had no idea what was going on. She complained that her head was itchy so I bought dandruff shampoo. It didn't help with the "flakes" so I got the more intense shampoo; the thick blackish colored one that smells like nasty medicine. It didn't work either.  Her pediatrician didn't see any symptoms or dryness. so we went to a dermatologist. She also found nothing. We weren't finding any concrete answers.

It's odd, concerning, and a bit surreal when you begin to realize there's a possibility your child may be the cause of her own pain and suffering.

I began wondering if her head was ever itchy.  Was she imagining or creating the few flakes by picking at her scalp? She told me (because her therapist told her) that she realized the picking was a mechanism used to help her cope with stress, but she couldn't stop doing it. It's no wonder since it has been found that "the behavior functions as something that is both arousing as well as calming."   It was a compulsion and it eventually spread to her chest, back, and face. The article:  Dermatillomania: When Self-Harm Becomes a Compulsion  describes Jordan's behaviors so well.  Especially this section:


In the end, this disorder is very debilitating in a social sense. In its initial stages, a person can hide their self-inflicted wounds with makeup, but as time passes, if it isn’t treated, the marks get worse and more difficult to hide, leading a person to avoid social contact in order to avoid drawing attention to their disfigured skin.

Jordan still struggles with this, although she has it much more under control. At this point in her life it rarely disrupts her ability to get to classes and social functions, although I'm not sure about her ability to shower and get sleep at a "healthy" hour. I tend not to ask very often.

She's almost 21, and it's her life. (This may sound harsh, but I certainly don't mean it that way.)  I have faith that if she is struggling, she will call me no matter what time of night (as she has done before) and ask me to help her get through it.

Which I will always be happy to do.

"I just want to be normal and I don't want to have to get special treatment in school."
"I feel badly that I put you and dad through all this. Kayla and Kevin don't."

How does a mother respond to these profoundly valid concerns?  I'm not sure, but here's what I came up with:

"This is our job and it's what we're supposed to do as parents. (I'll give this a C+) We'll figure it out and get you the help you need so everything will work out (This earns a B?). I know that life seems hard for you sometimes, but you have so many gifts that make your life much easier too."  (Maybe this gets an A-)

This averages out to a B. Not too shabby considering the entire situation made me sad.  She did struggle.  More than I ever had, and more than I realized was possible. I had no idea how hard life could be for the superheroes of the world. I wasn't even aware that they existed.

I believed what I told her.  I knew our first responsibility was to help minimize her school work-load. If that didn't help, I figured we could ask about increasing her Lexapro (which is something I never thought we would need to do).   I guess initially I may have viewed medication as a possible miracle cure.  (BTW, it's not...)
This entry ended with one thought/concern/worry/fear:
I wonder if she will ever be able to live on her own, away from home and away from us.  I sure hope so.

Jordan is currently a junior in college and living off campus. It might not always be easy for her, but she is doing it 😊and I couldn't be more proud of her.