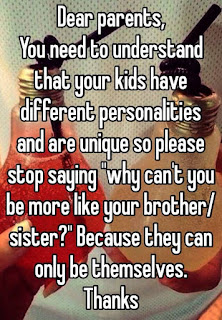 I may have thought this, but I'm thankful I never said it.


As I had mentioned, it's common knowledge that parents should try not to compare their children. Each one of them has their own strengths and weaknesses. Each should be nurtured and tended to, because individual children will develop at their own pace. They all possess an assortment of different emotions and personalities... Blah, blah, blah.

That's hard to do when you have two children, who are both sick, and one takes the chew-able Tylenol in 30 seconds, while the other eventually gets it down after 40 minutes. And because said tablet is laying around for those 40 minutes, the chances are pretty high that an energetic little puppy named Ladybug, will eventually, accidentally eat it. And she did.

Here's the thing. I always tasted medicine before I gave it to my children, and these tablets were delicious. I also knew better than to hand them pills that needed to be swallowed, because most kindergarten and first grade children have not yet mastered this skill. So I thought I was being a reasonable mom, making a reasonable request for my children. I don't specifically remember, but I assume we were out of the liquid Tylenol. Although knowing my stubborn streak, at this point, if we did have it, I may have neglected to offer it to Jordan anyway. Because her younger sister chewed up the medicine in seconds.

So Kayla, who was now feeling much better, went downstairs to play and romp around with the currently medicated Ladybug. (Who I was informed by the vet, was going to be fine.) And Jordan, who was currently un-medicated, stayed upstairs and probably continued to feel pretty crappy.

Live and learn. I guess. Ugh.

Thankfully, she decided to eventually take the medicine. Every time something like this happened, it kind of broke my heart (And it still does). She didn't feel well, and as the last post mentioned, I "felt it twice". But I was also frustrated, angry and seemingly powerless. You can't force a seven year old to chew up and swallow a pill, even if it does taste sweet and fruity. It really was much easier to squirt liquid Tylenol into the mouths of screaming infants. Things do change as they get older.

Was all of this a symptom of her anxiety? Maybe. I don't really know. It probably was. Because who wants to continue to feel sick, if they have the choice to help themselves feel better? No one, right? So maybe some people truly can't help themselves.