It's Never Just About a Shirt 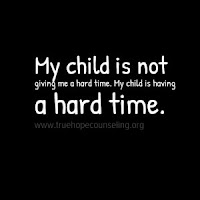 For those of you who may be traveling this winter, I feel for you especially if you have strong willed kids. Spending the holidays with family is a time to be cherished, it's how traditions and special memories are created. That's the Hallmark version.  It can also be a time when blood pressure has the tendency to sky rocket, fingernails are reduced to stubs, and quite frankly, the caloric intake reaches sickening levels      What??  Isn't this how everyone reacts?

Obviously kids aren't the only ones who feel the stress of traveling.  Moving in with another family, even for a short time, can be tough. It's hard not to notice different parenting styles when you're all smashed into one living space.  At home we tried to keep our lives as predictable and orderly as possible, because when you have one child who gets thrown off by any unexpected change, you get amazingly efficient at scheduling. But when we traveled we tended to acquiesce to the rules of the household we were visiting. What choice did we have? Tell Jordan to go to bed earlier than the others, because "You know how you get"? Yeah, that would have gone over real well.

Our kids only have four first cousins. Two boys live five minutes away. The other two boys live seven hours away. We tried to make the longer trip at least every other year when the kids were younger. The cousins were good friends and have been getting together yearly since they were born,
so in theory, these visits should have been a blast. Don't get me wrong, when we look back at the trips, we all smile. That being said, there were usually moments of intense emotion because Jordan was pushed to her limits.

On one particular trip, Jordan missed the first three innings of her cousin's baseball game because Kayla wouldn't let her wear a shirt that was brought by, and belonged to, Kayla.  Picture four loud kids and five adults all trying to leave the house at the same time, while one child is locked in a room unable to break herself out of the cycle of despair and anger. Eventually everyone else left, and I stayed back with her. I'm sure initially she and I were both feeling angry and embarrassed, but we talked it out like we always did, and made it to the game.

This was by no means the first time a situation like this evolved while spending time with family, so no one was shocked by her behavior. That being said, inevitably someone would ask where Jordan was or what was wrong with her. It was difficult for me to explain why she behaved the way she did. Keep in mind she wasn't diagnosed yet, so what could I say to help other's understand?  I didn't even fully understand myself. I usually explained it this way: This is just how she is, she really can't help it, and she isn't trying to mess up anyone's plans.  It usually ended with a sentence that helped to reassure the person affected, (this time it was her baseball-playing cousin) that it had absolutely nothing to do with him.

For every heated moment we were faced with, there were hundreds of beautiful, loving moments too. Jordan was (and still is) a wonderful, smart, caring, funny, passionate girl, who has a million gifts to share.  I'm not sure why, but I felt the need to say this. :)