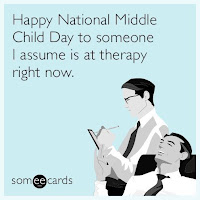 One night Kayla asked me to help paint her nails so they would look like basketballs. I told her I would after Kevin was done with his homework. Kevin struggled with spelling, writing and staying focused, so I sat with him each night.  Although it was frustrating, because he was a fourth grade boy forced to do tasks that were difficult for him, it's what we did.

When Kevin was done, (and me too, emotionally) I went into Kayla’s room. I sensed that she was already frustrated because it took me so long. but I attempted to paint the black lines on her nails. I messed up on the first try, which isn't surprising because painting nails was not my thing. So now I’m annoyed and pushed to my limits, and she started crying. When I felt pressured and stressed I tended to verbally spew out everything on my mind, and that's what I did. I went on about how I had "had it" with all of their needs, and how homework does, and will always, be more important than nail painting…

Even through her tears she spoke so eloquently about how I upset her and how she waited patiently for me. She was beautifully honest. In her opinion I needed to help Kevin with his homework way too much, because “he must know how to spell those words”. He struggled academically in a way she couldn’t understand.  I instantly calmed down and began listening to her, because I had to. She was right. With all the drama going on with Jordan and Kevin's nightly homework episodes, she tended to get overlooked.

I apologized and explained how when I was angry, I tended to lash out and say things without thinking. I told her I was proud that she shared her feelings with me, and how grown up and mature she behaved. She was eleven, and she amazed me.  It was at this moment I decided we would stay overnight for her next basketball tournament, so we could go to Dorney Park with some of her teammates. We had planned to go to the games, but not stay overnight. I wasn’t comfortable going without Adam, especially since the other parents who were staying overnight were all men. Picture me with three other dads, riding on the coasters. I was out of my comfort zone, but I did it, and Kayla and I had fun. Plus, she made a right handed layup in one of the games. :)