"The Terrible Two's" - Ain't That the Truth 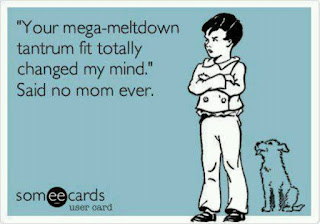 I knew that this was coming. I was warned. But like everything else, if you haven't lived through it, you don't really know what to expect. How does this transformation happen right before our eyes? Maybe it's because our children physically gain in strength and size. The anger that they once displayed kind of multiplies and grows in intensity, along with their bodies. I guess I really didn't think that it was possible for Jordan's intensity to increase, but it did.

When Jordan was two, her new goal in life appeared to be getting Kayla to smile at her, which she did all of the time. It was so cute. Since Jordan was speaking, and repeating herself (a lot) at this point, Kayla was the perfect audience. The doctor told us that her speech was a bit unclear because her thought patterns were so advanced for her age. It was like her brain was moving faster than her mouth could keep up. When she saw a pregnant woman and asked what was in her belly, I explained that it was a baby. I told her that she and Kayla were once in my belly and her clever reply was  “Me out now”. When Grandpa Tony hurt his back, she suggested that we get him a band aid. I was so amazed by her, and by everything that she did and said. She started out as this helpless infant, and now she was becoming a beautiful, logical, person right before my eyes.

I watched her as she began to give Adam a hard time. How can  that be explained? It was like she was pressing his buttons. I had no idea how this was possible for such a young child. She whined and carried on in shopping carts, and pretty much tortured him with defiance and complaints. When he changed her diaper, put on her shoes, gave her dinner, you name it, she fought it. He and I did things differently, and I could tell that she realized this.

So now I began to worry that maybe I gave in to her too easily, just to avoid the tantrums. An example of this was when I would let her out of the shopping cart. I wouldn't have done this if she wasn't so well behaved walking around stores, but she was so good. I didn't see the need for her to stay in the cart. She always stayed close by, didn't grab things off the shelf. So what was the harm of getting her out of the cart? But he didn't let her out. This, not surprisingly, made her angry.

Only one time did she run away from me in a parking lot. My quick reaction was to smack her butt. I was scared for her safety and I wanted her to feel the potential danger and fear of this situation.  The way I saw it, getting hit by a car will always be much worse than getting a smack on the butt. And she never did it again.

Some days she threw up to four tantrums. And I mean full-fledged  kicking and screaming, all out tantrums. Once she started them, she wouldn't (or couldn't) stop on her own. I would get hit or kicked if I tried to calm her down. Sometimes these went on for hours. The only way to stop her was to go into her room, and just sit and watch painfully. She would eventually see us sitting there and slowly calm down, and start talking to us about something. Then it was over. These usually occurred when she didn't get her way, which pretty much happened a million times a day. Clean up, time to eat, finish a game, turn off the T.V., get dressed, leave play group... She didn't want to do any of these things.  Do you know how difficult it is to try to get a child filled with rage out of a friend's house, through a door and home, while pushing Kayla in a stroller? I was so angry by the time we wrestled our way home. At least I wasn't pregnant anymore.

She told us “No.” no matter what we asked her to do. Sometimes she would yell it, and other times she would look all shy and put her chin to her chest, look up through her thick dark brown bangs, and whisper “No.”. What?? So sometimes we hit her butt, or yelled, or spoke to her, or put her in her crib without her pacifiers. We had thought and/or hoped that at least one of these techniques would be effective. After all, they worked for my parents.  But it did not seem to be working for us. No matter what we did and how consistent we were, it didn't seem to curtail her negative, defiant, repetitive behaviors.

This led to so many feelings of frustration and insecurity for me... What happened to: "If you are consistent then everything will be fine. Kids need consistency. If they know what to expect, then they will be comfortable."? One would assume that if a child is comfortable, then she will be compliant and somewhat easy going. That did not seem to be the case in our situation.

And I had no idea why.