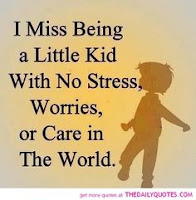 Eighteen years ago, if I had read this quote, I would have had a much different reaction to it than I do today. I enjoyed my childhood, and I still often miss the many innocent freedoms that I had. During the summers, the neighborhood kids and I would put on musicals and plays, write our own stories, climb trees, and play every sport imaginable, until we heard our parents call us in for dinner. We spent year after year developing "Rockville" in a nearby yard. Rockville was an imaginary town set back in the woods. It had houses, stores and roads, all defined with rocks (hence the clever name). Everything was made from items in nature: the furniture, the "food", the brooms and dishes... When I first read the children's book Roxaboxen, I was so excited to see a book that seemed to emulate such an important part of my childhood.

And then I had Jordan. Jordan tended to have stress, worries, and cares in her world. I figured since we are right smack in the middle of the holiday season, that I would share this little anecdote:

When Jordan was a month shy of turning three, she worried that Santa would eat too many cookies on Christmas Eve, and get a stomach ache. Now, this wasn't a ploy used so she would get to eat the cookies herself. She was truly worried about Santa's health. After all, almost everyone leaves cookies out for Santa. It would be too much. We tried to reassure her that he would limit his cookie intake, and maybe bring some back for the elves. We also made sure that we only ate one cookie off of our plate that night.

She also asked over and over again "Is tonight Christmas Eve, the night before Christmas? Is tomorrow Christmas? Not now..." (meaning not yet). It was as if she couldn't believe it was finally here. When I say that she said it over and over again, I mean she said it exactly the same way, over thirty times in two hours. She was like a broken record, her mind kind of getting 'stuck' on the same loop of excitement and worry. Unfortunately throughout the years, her mind still seemed to get stuck in similar loops, most of them having the tendency of being somewhat negative and debilitating. Thankfully this happens less often as she grows and as that frontal lobe continues to mature. Come on frontal lobe-  I'm routing for you!

With all of this going on in her young mind, you would think that she would cry before going to sleep on the night that Santa arrived, like she did so many other nights. But did she? No. Not a peep. I wished that it could have been Christmas Eve every night. Maybe Santa knew something that we didn't.

So as you can imagine, my perception regarding this quote has changed a bit. Although I do think (and hope) that Jordan is able to look back fondly on her childhood............

I just asked her if she does look back fondly, while she is totally stressed out and working on senior papers and projects due before the break, and she said "yeah". I'll take it. :)

I love the lyrics to this song. It's called Stressed Out, by Twenty One Pilots.