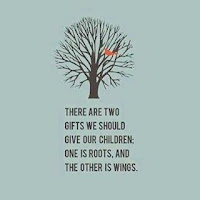 I forgot to mention that Jordan was asked to read her paper to the member's of the Daughter's of the Revolution (D.A.R.). She had to introduce us, her teacher, and herself, while speaking with a mic. This was big time for a fifth grader, and also for a fifth grader's parents. ;)


I remember quite clearly, feeling intense emotions while she was speaking. The best way to describe it; I felt absolutely out of control.  It was scary, mind-blowing and poignant, all at the same time. There was my baby, who was usually so self conscious, standing alone, all eyes on her. My only job was to watch, watch, as she slowly drifted further away from me.


It was a profound moment. I don't think I heard a word she said, and was basically concentrating on breathing, until I heard the applause.

I guess it's moments like these that help better prepare parents for their kids' inevitable journey towards adulthood. You know... the whole roots and wings thing. Personally I like the roots way more than the wings, but maybe that's just me.