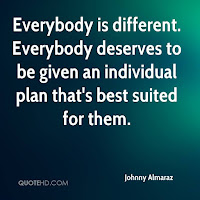 I feel the need to clarify something after writing my last post.  I'm typically not one of those parents who would do anything for her child no matter what.  Although it may have been uncomfortable or nerve wracking, I tried to let our kids do things on their own.  At least I think I did.  Some of my friends who were not Stay-At-Home-Moms once told me I was "not a typical" SAHM. I had no idea how to take this, and I think I may have been a bit offended, but they meant it as a compliment. Well okay then.  :)

The thing is, when you have a child who is afraid to try, it gets complicated.  Do you let her sit out and observe, or do you push? (Because parents always know what's best, right?)  It's funny. When Jordan was younger I would get frustrated and angry, and inevitably I would push her.  If she finally attempted whatever it was she feared failing at, and she didn't succeed, it was no big deal;  a missed basket, an untied shoe, not standing on a scooter, a splash of water in the face, a small spill on an even smaller bike...

Now that Jordan is older, and it is expected that she do almost everything on her own, failure can be (and sometimes is) a big deal. The adjectives "uncomfortable" and "nerve wracking" don't even come close to doing it justice. There are boys, friends, school, drugs and alcohol, med changes and mental health, travel, self care, time management, moving vehicles...  There is life.

It's hard to know how much support is too much, when you know what's at stake.  In my mind I know what a 20 year old should be able to do.  I also know how trivial and inaccurate this statement is.

Just taking it little by little, day by day.