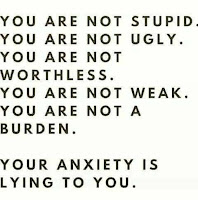 This title may be a bit dramatic, but one month after our good times were rolling along the crap started hitting the fan again.  Jordan's 9th grade work load was crazy busy. Between the AP class and no scheduled study halls, she had absolutely no down time. Her counselor suggested she add choir to her schedule, but in order to do this she would have had to skip one French class a week.   Um... No.

Sure. Ask a 9th grader who struggled with Generalized Anxiety Disorder (GAD) to skip a class that she'll still be responsible for, while she's taking a college level class. Yeah, that sounds fair.  Needless to say, we arranged a meeting with her counselor.

The stress began to take its toll on Jordan.  She felt "stupid" because she received help, and apparently it wasn't "enough".  She told me she started picking at her scalp again, which had the propensity to lead to less study time, later bed times, and ultimately, sleep deprivation.  Crap.  If this wasn't upsetting enough, she said she didn't want to tell Adam and me for fear that we would be angry and disappointed. 😟 (I was disappointed because her transition to meds had been such a positive one, and I had so much hope, but I certainly didn't share this with her.)

Let this be a friendly reminder for those who may be going through similar situations; Taking medication is only one piece of the puzzle.  It's not a miracle cure and it may not always be effective. But please don't lose hope. There are many different therapists, doctors, and medications to chose from, so hang in there and keep plugging along until you find what works for your beautiful super hero.