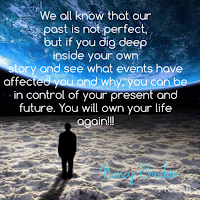 For the most part, Adam and I were on the same page about how to deal with all of this. But there were times when we were not. Sometimes I would get very angry at him for how he dealt with Jordan and her outbursts. He began to get into the habit of running into Jordan's room before bed, whenever she cried. And as you know by now, she cried quite often.

On one particular night before her third birthday, he went into her room five times. Five times! She would stop crying when he spoke to her, but when he left, she started up again. I would cry too, if I knew that my dad would come running up to talk to me each time that I did. He finally decided to shut her door, which was the original plan. It was about time. So, what did she do? She got out of bed and opened her door back up. What??

I thought that she should have been yelled at for doing this, but Adam went back up to her room and talked to her, again.  What the hell was he saying to her? That's when Jordan told him: "I don't want it to be my birthday tomorrow."

Of course, Adam felt badly after hearing her say that. But did I? Not exactly. My reaction was, and I quote: "What a ****ing headcase".

Okay, so sharing this today makes me cringe a bit, now that we have a much better understanding of Jordan and her anxiety. But in my defense, she also told him that her ears hurt, that we didn't feed Fishy (and we did), that she wanted her baby doll... In my mind, she was playing him like a fool.

Remember how I mentioned in my last blog that I was proud of myself for not getting angry when on Christmas Eve, our plans fell through? Don't worry, that is the honest truth. Today, I no longer feel the anger, the responsibility, or the worry. But it took me almost eighteen years to get to this point.  Eighteen years of trying to cope and understand why our lives seemed so full of turmoil, so often.

I don't want to come across like some super woman, who knows exactly how to handle these types of difficult, seemingly personal, sometimes disappointing situations. Because it took me a long time, and a lot of work to get here, and at times I still struggle.

I will say that it was worth it. Being angry, resentful, or intimidated by your own child, is not okay. And not seeing eye-to-eye with your husband, well that sucks too.

In the next entry, (and probably many that follow) I would like to share with you how remembering some my actions towards Jordan, affects me today.

I figure the more I understand and come to terms with my past behaviors, good or bad, the more success I will have controlling my current emotions, and ultimately my life.