If We Ever Doubted That The Issues Are Real... 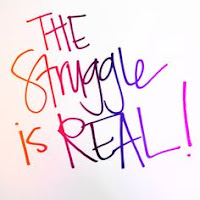 Every once in awhile I think it's easy to forget that the struggles fought by many are very real. Maybe this is why people decide to go off of their meds. When things begin to get better, they wonder if medication is necessary. But the struggles shouldn't ever be overlooked, ignored, or forgotten. A few days ago, our family (well, mostly Jordan) was reminded of, and slammed hard with, this dose of reality.

Here's the abridged version of the story. Adam and I were going to be away during Arcadia's Honors orientation day. Because of this, Jordan and I did a practice, or a "dry run". We took the train, and then a bus to Arcadia. Never having done this before, I asked the bus driver if the bus went to Arcadia. It did, and six minutes later, we stopped at the school.

The day went well. Jordan and I explored campus again, ate lunch, and came home. She and I both felt okay about her doing this on her own.

At six in the morning, Kayla dropped Jordan off at the train station. She rode the train, walked the short walk to the bus stop, and got on the bus. So far so good. But she didn't ask the driver if this bus went to Arcadia. And she wasn't positive which stop was hers. Plus, she had never pulled a stop cord before.

So she didn't get off the bus.

Not until someone else pulled the cord, maybe ten minutes later, and she followed them off. She had no idea where she was.

This is what anxiety can do.

I received a frantic call at eight in the morning. Jordan was lost, crying, and walking aimlessly somewhere near Philly. We were lying in a bed in Baltimore. It took a while for Adam to find her location on his phone. I stayed on the phone, attempting to calm her down, and we were eventually able to lead her towards a Rite Aid. We called and woke up her wonderful 18 year old cousin, and he was on the road within five minutes to pick her up, and drive her home.

Why am I sharing this? It's certainly not a plea for sympathy. The last thing Jordan wants is for people to feel sorry for her. I think she would be happy knowing that people were willing to attempt to gain a better understanding of the possible struggles and limitations.

I said long ago that this blog was not going to be a play-by-play of Jordan's life. But this is important. It's obviously important for us, and especially Jordan, to realize her limitations. But it's also vital for people to be open minded and accepting of those who are struggling.

And yes, it is very real.