The Times They Are A Changin 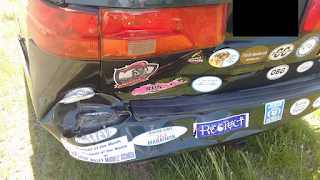 This entry is a little different than the others. It actually has nothing to do with the trials and tribulations of raising our family, but I still think it's worth writing about. We are all going to experience similar circumstances throughout our lives. There's just no avoiding change.

We had a small mishap with our beloved 2000 Honda Odyssey. When I say beloved, I actually do mean, I think I loved this van. If one of our kids said anything negative about it, I would joke and put my hands over the steering wheel, as if covering it's ears. If it struggled to get up a hill, I would coax it along saying things like "Come on baby, you can do it." Granted I only did this when the kids were in the van, to get a reaction, but still.

Our family grew up in this van. I sat in the back so I could be on pacifier duty, and nurse the kids. We ate hundreds of meals in it. We pulled over threatening to leave the kids on the side of the road, if they didn't stop crying... You know, all the parent-like things that we, as parents, are forced to do. It had over 200,000 miles. That added up to a lot of road trips. During the trips, the kids used to journal about the places we were going, drawing pictures of the Verrazano Bridge, the Chesapeake Bay Bridge, the Horse Shoe Curve, Monticello, and roller coasters from Cedar Point, Dutch Wonderland, and Sesame Place...

Although the accident was not a bad one, sadly, the van was totaled. So Adam and I had to clean it out yesterday. My goal was to "act like an adult", realizing that a van is a materialistic, non-living thing. But instead, I cried like a baby. Because I realized, it's the end of an era. The end of me being a mom of little kids who needed me all the time. The end of obnoxious school bumper stickers, of toys, markers, and drawing paper in every seat pocket. The end of triple-checking that we had enough batteries for the headphones, and movies for the player, so no one would lose their mind on a long trip. I guess it's actually the beginning of the end. The responsibility of  having to drive the kids to all of their many sports, concerts, friend's houses, and schools. has already lessened.

I'm not going to lie and say I didn't complain about being an unpaid taxi driver all those years, but it's still hard to let go. Even though having a mini van would be convenient, especially considering (in theory) we need to move all three of our kids somewhere, within the next three years, we are not going to get another one. My days of being a somewhat embarrassing (according to the kids) mini-van-driving-momma, are over.

I guess this is okay. Because when one chapter in life comes to an end, another one inevitably begins. And, as I understand it, new beginnings are something to be cherished.