Some Venting and Ranting

Uggh. Yesterday was a crappy day for me. One of those days when you look forward to nothing and doubt everything about life. When every thought steers you towards worry and negativity. So I informed Jordan that I would not be able to "help" her. Which means, I won't be making sure that she eats, I won't help her not get stuck in front of the mirror, and I won't help her to get into the shower. (Which basically means I look out the window and at my phone, so she can get in without picking. I figured there needed to be an explanation of how this works).

We're all allowed to have one of these days, right?

So she did get herself Honey Nut Cheerios for breakfast, which is a positive. She knows it's not the most nutritious choice, but it's something that takes little effort. And she ate it. So there's hope. She looked up a new eating disorder, that she feels describes her behaviors. It's called:
Avoidant/Restrictive Food Intake Disorder.

Yay. Another disorder. I have previously written about the group of people who were graced with the whole "package" of mental illnesses. It makes life rough for them, and my current perspective is that it totally sucks. So instead of having permission (especially as a parent) to get angry and insist that your eighteen year old eat enough to maintain a healthy lifestyle, you understand that this may fall on deaf ears.

Well not deaf ears, not even stubborn ears, but perhaps "incapable' ears. Because if there are others who suffer with this, enough so that a new disorder was named to classify and describe it, then it must be real. Right?

So what do you do? What course of action do you take when you know someone can't help or change their behaviors? Do you assist them by doing tasks for them, like a crutch? I know I sometimes do. Do you let the person omit themselves from "normal" life activities like working, driving, shopping, going out to eat, hanging out with friends... because of anxiety, and self-consciousness due of self induced skin issues?

I actually have no idea. Even if I did know what to do, none of this is in my control anyway.

I do know that life will not always be this way. It will get better. Then it won't. And it will continue on in this fashion whether any of us like it or not.

Thankfully I have learned how, and am now capable of, taking time out for me. Even when it may sometimes feel selfish. If my bike ride or run means that Jordan will not yet get her day started, or my blogging means that she is sleeping well beyond the usual dinnertime, it's okay.

It kind of sucks, but it's okay. Whether I like it or not...

I hope I don't offend anybody, but I'm going to let this image sum things up. 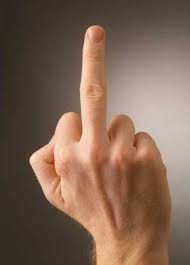 I think I feel a little bit better now. :)