Sorry I Ruined Your Life, But I'm Your Mom 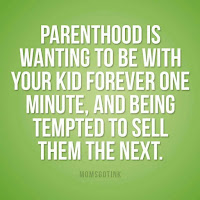 As most responsible parents would have done, we asked Jordan to admit that she pushed Kayla, and apologize for doing it.

What do you do when your eight year old refused not only to mutter the words "I'm sorry", but you feared the possibility that her head might actually burst, right before your eyes? We were in the midst of a HUGE meltdown. This was full blown, limbs-flailing meltdown, filled with screeching and shouting about how much she hated us. She was pissed. If you're anything like me, when faced with this level of rage, your instinct is to match it. But when it's your child, it's different. Yes, I was angry, but mixed in with the anger was confusion, shock, and fear.

My thought process was this; we needed to be at the gym on time. I guess one of us could have stayed home with Jordan, and the other have taken Kayla to the game, but this didn't seem like a viable option. Why, you ask? I'm not sure if it was the idea that; 'she committed to being on this team', or because I was worried about how to explain why she missed the game.

See... I wasn't always as open and honest about family issues as I am today.

Believe it or not, there was a positive ending to this whole fiasco. Jordan's head did eventually stop spinning, and she did apologize. Even better, we made it to the basketball game on time. This was progress. It really was. And after all that... she scored three baskets in a row.


Proof that despite the fact that sh*t happens, patience and love can guide families, and help life to continue moving in a positive direction.