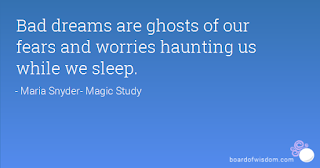 When Jordan was in kindergarten we began to notice that she started developing certain fears. She would wake up complaining of having scary thoughts and dreams, and saying that it was too dark. She had a night light in her room, but I started to leave the hallway light on, with her door open. The downside of this was when we stayed overnight at a friend's house, she would freak out because it was too dark to sleep.

Before a dance recital she would cry, telling me she didn't know the dance steps. We would have her watch the video I took of a practice, and even write the steps down, so she would feel more prepared. Usually, as far as I could tell, she knew the steps very well, (something that goes right along with being a perfectionist) but without this extra practice and preparedness, she refused to perform.

After a particular recital was over, one in which she did a great job and appeared to have fun, she told me she didn't "want to be an adult.” I had no idea why a five year old would worry about this. Maybe it was because of the dresses and makeup all the girls wore, but I wasn't sure. I reassured her that she doesn't need to worry about that for a very long time. I also explained how I loved being an adult, and a mom, and that's why I chose to stay home with my wonderful kids.

Why was Jordan changing, and worrying more? My assumption is, the more she experienced life, the more she worried about it. Imagine how she must feel at the age of eighteen, a few weeks before going away to college. Damn.

For a few weeks now, I have voiced my concerns to Jordan, regarding how staying in bed after 2:00 pm on the days that I am not home, is well...concerning to me. She told me it's because she hasn't been sleeping well, and she's being woken up by scary, horrible dreams.

When she was five, what was worse than her having trouble sleeping, was when she shocked me by saying things such as "I hate myself", and "I wish I weren't alive." She was in kindergarten! Where does that even come from? I don't think I got angry at her for saying things like this, at least not when she was so young. But as the years went on, I did get angry. Because...what the hell? Things may not have been perfect in the Beck household, but were they really that bad?

Unfortunately, I eventually, innately, began to take these statements personally. Of course, I realize today, that nothing about chemical imbalances or mental illnesses is personal. Sure, everyone plays a role, but to place blame or develop feelings of guilt, there's no place for that.

But this took me a long time to learn. And as you can imagine, if a child is hurting, and in effect, her mother is wracked with feelings of guilt and anger, life can get pretty rough. And it did.