Another Sneak Peak Into Our Future? 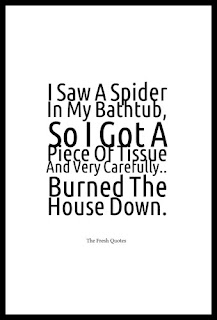 The common (IL) logic behind fears.

After the canoeing situation was resolved, the Becks found ourselves with another camp predicament. Some of the other girls told Jordan there were spiders crawling on the inside walls of the porta-potties. Once she heard this, there was no way Jordan would even think about entering one. Even if she needed to. In her mind, at that moment, the spider-filled bathrooms were permanently closed.

Even though she hadn't mentioned anything about the spiders to me, it became crystal clear that she hadn't 'gone' all day. Because the second she came home from camp. she bolted into our bathroom. That's when I heard the piercing cry. I went running over, not sure what I would be walking into. And then I knew.

"We need a clean up in half-bath one."

But no worries. Jordan had a solution to the whole spider dilemma. Any second grader who knows anything about the human body, realizes that the less you drink, the less you have to pee. So the following day she decided to stop drinking. Problem solved, right?

Um... sure. Except for the fact that it was a humid, 95 degree day. When she came home, I noticed that her water bottle was still full.

Am I wrong in thinking that this was extreme behavior? She was trying to control her physical, autonomic, bodily functions, in order to avoid something she feared; to the point where she caused herself physical discomfort. I didn't panic or get freaked out, and we discussed the importance of staying hydrated and healthy... but I think this gave me, yet another glimpse, into what we could possibly be faced with, as Jordan matured. My thought process was: One day something similar to this may come back and bite us in the butts.

Because we all know that teenagers have the tendency to be more... well... they tend to be more everything.

And I haven't even written about the bees yet.