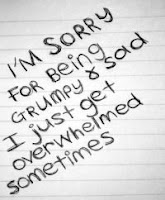 I’m not sure if this is true for all those battling the gamut of mental struggles (anxiety, perfectionism, depression, over-stimulation…) but life’s BIG moments, the significant ones like holidays and celebrations, appear to be so very difficult for those afflicted. And I assume it’s probably harder for kids, although being an adult is no picnic either, so I guess I'm not sure about that.

I think I mentioned this in earlier posts, but Jordan’s Christmas days always began with such excitement and optimism. She truly believed in the picture perfect magic of Christmas. The problem was, inevitably something unexpected would occur, and it would completely derail her from her "joy-ride". (Get it? derail and ride)

Of course something unexpected was bound to happen. And here's why: Jordan was going to be 13 in less than two weeks (and we all remember the joys of being 13), we had four excited, high-energy people surrounding the Christmas tree in a small room, and we had one lower energy person trying his best to keep up). Not to mention, we were all aware of the impending time parameter, the one that in theory, would get us out the door and to a family party by a specific time.

Some people can roll with the excitement, the exhilaration and the family togetherness that go hand in hand with a holiday celebration. For someone like Jordan, it was hard. All of a sudden we would watch her close up and shut down. She quickly went from a level of near-elation, to (dare I say) the gallows of depression. It was different, and maybe easier than the huge fits she used to throw, but certainly not any better.

Later she would always apologize and explain that she couldn't help it. Once it began, once she got angry, even for the smallest thing, she would have no control. Of course I believed her, but it made me sad; sad that she went through it, and sad that she felt the need to apologize to us afterwards.