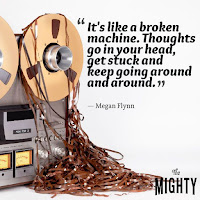 Five seemingly endless days later, Jordan and her friend made up. Woot! They apologized to each other on Facebook, and all was right with the world. Or so you would think. It was the week before spring break, so the 7th grade school workload was piling up. Jordan had a one (yes, one) to five minute oral report to prepare for, and it wasn’t going well. The problem? Jordan believed the antagonist from the book was the character’s cerebral palsy, while her teacher informed the class that the antagonist had to be a character in the story.

She was seriously stuck, and nothing could be said or done to get her unstuck. Believe me, we tried. We gave her suggestions, spoke rationally, tried to wait it out... all to no avail. She cried from 6:00 to 9:00pm. Three long hours. I would like to say these three hours were the most trying of my life, but they weren't. As you're probably well aware, this was not the first time Jordan's emotions pushed her to the brink.

I'm not sure why my brain is taking me here, but I'm gonna run with it...Listening to your infant screaming while having absolutely no idea why, it was like participating in a gut wrenching guessing game. I remember thinking nothing could be worse than this. Man, was I wrong. Helplessly watching Jordan begin to drown in overwhelming hopelessness when she was thirteen... that was worse.

I think people have certain expectations of thirteen year olds. We assume they have the ability to communicate and articulate their desires and feelings. Unlike infants, teens are capable of speaking, reasoning and listening. Unless they aren't.