It was found in the blog World of Psychology, that:
The severity of children’s reactions has been positively correlated with parental distress (parental post-traumatic stress and crying in front of the child) and with the number of graphic images seen on television.
In retrospect, perhaps I should have distracted Jordan so she didn't witness the horrific images being continuously shown. But no matter how impossibly unbelievable the images were, I was shocked and almost mesmerized, as was the rest of the world. 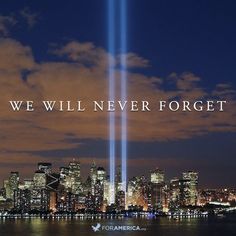 I thought I would leave this journal entry exactly as I had written it over fifteen years ago. Because this day changed everything, and affected everyone, including our children.

A Day No One Will Ever Forget

This day will forever be etched into our minds. Everyone knows exactly what they were doing when they discovered that America was under attack. The kids and I were all in the living room watching Sesame Street. I was probably one of the few people who didn't have their show interrupted by the media. Adam called me from work and told me what was happening. That's when I changed the channel and saw the surreal footage being played, again and again.

That first plane crashing into 1 World Trade Center, in my mind, had to be a bizarre accident. But then fifteen minutes later, the second plane crashed into the South Tower. I still couldn't let myself believe that this was a terrorist attack on the United States. Things like that just didn't happen.

But they do. And they did.

Within the next forty minutes it was discovered that two more planes had been hijacked. One crashed down in a field in Shanksville, PA, and one flew directly into the Pentagon. All of these buildings and planes had people in them. Sons, daughters, wives, husbands, children, grandchildren... It was inconceivable, everything that was happening right before our eyes.

I wondered what kind of world our kids were going to grow up in. It felt like a movie. But it wasn't. It was really happening, and thousands of people had lost someone they loved. I felt lucky we didn't lose anyone close to us, but just knowing the pain that so many others felt, almost caused an internal sense of guilt. Maybe it was because I grew up in Long Island, and New York City was, in my mind, the ONLY city.

As I watched the footage, which was almost addictive, I never really thought about the effect that it could have on our kids. I just categorized all three of them as babies. But Jordan was not a baby. She was three years and eight months old, and she was taking it all in.

Here's how I know. She woke up at 4:15 am the following night and said that she was “afraid of the dark”. She never did that. I couldn't sleep either. It felt wrong to sleep while so many other people were hurting. I worried that we were at war, and wondered if the United States would begin to draft men who were in their thirties, even those who were raising young kids. Men like Adam.

The next day we all heard a loud truck go by and Jordan said it sounded like a plane crashing into a building. I told her that we were safe in our house, (were we?) but I had to admit that my heart jumped at the sound too. The world felt like a crazy place.

It began to rain, and I worried about all the rescue personnel who were out there searching for survivors. While watching the service at the National Cathedral I cried, and Jordan lay her head down on me and hugged me. She was such a special little girl.

The next day I told the girls that Grandma Weeze and Grandpa Tony were coming back from Prince Edward Island, Canada, and Jordan asked if it was safe to fly. How do you answer that question? We told her that yes, it was. They did have to stay an extra three days, since all planes were initially grounded. It was scary. When they got here, she wanted to know if they were in New York City when the planes crashed into the buildings. This made Adam cry.

On the drive to an orchard, she saw a building and said “That building can fall down, or planes can hit it like the city buildings.” A week later when Jordan was playing, she said to herself “People died in the plane fire. Why did they? Because they had to, that's why.”

This was the epitome of a young child, who was trying to make sense out of something that was completely and utterly senseless.