Being Your Own Worst Enemy 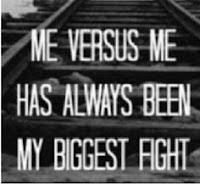 This would have made no sense to me before having Jordan.

When Jordan was five, I began to get frustrated with some of her hang-ups. It drove me nuts when she would attempt something new (which was pretty much everything when you're five), got very angry, and then instantly gave up.

That was just never my MO. It takes patience, hard work, and a certain amount of tenacity to learn any new skill. If you think about it, nobody is born knowing how to do anything. Life has to be experienced and learned. But Jordan gave up so quickly, that she wasn't even giving herself the chance to succeed. Or to fail.

As you can imagine, the many small milestones in life were anything but small, when Jordan was concerned. This included learning to tie her shoes. I realize this takes coordination and precise small muscle control, but Jordan possessed both. It should have been smooth sailing.

But it wasn't. She would repeatedly say things such as: “I can't do it. I don't want to tie my shoes, it's too hard. I'm never going to tie them again!“ She would get so frustrated, and usually storm away in her sock covered feet. This was difficult for me to watch because she was so hard on herself. She wouldn't even give herself the chance to learn. If she couldn't tie the perfect bow instantly and perfectly, she wouldn't tie it at all.

She was her own worst enemy, and it sucked. Actually, it still sucks today.

It didn't help that Kayla sat down a few times when Grandma Weeze was helping Jordan learn how to tie. and just like that, she could tie her shoes. No anger, no frustration. Her reaction when she messed up? She would laugh. There were actually a few times when Kayla tied Jordan's shoes for her. She was only three years and eight months old, and she was tying her five year old sister's shoes. Not good. You would think having your younger sister master the skill, would be ample motivation to overcome your own doubts and fears.

Not so much. It took me many years to realize that not everyone works this way. Because even after Kayla could tie, there were times when Jordan still insisted that she couldn't, and wouldn't do it.