If I Only Knew Why 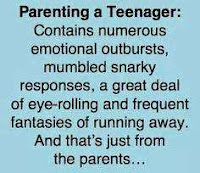 Two days after the non-existent picture fiasco (which apparently I was still not quite over) Jordan stayed in bed from around 2:00 to 7:30. She then ate dinner by herself. Needless to say, the majority of the day was undeniably uncomfortable. My brain was brimming with feelings of both sadness and anger, mostly because I had no idea how to deal with her. (For those of you who are lucky enough to  not have a true picture of the inner workings of my brain, I tended to get angry when I felt out of control. And, no, this is not the most productive reaction out there.)

Thankfully that night she went skating with friends.  I was thrilled she was getting out of the house, being social, and being a kid.

So again I asked myself:  Was the reason behind yet another awful day because of  OCD, OCPD, anxiety, depression, (this was becoming quite the list) or was it plain old stubbornness/her desire for control?  If this was all based on her attempt at obtaining a position of control, I would have been majorly pissed. She was only thirteen, and no thirteen-year-old should have total control over a household.

If it was because of one (or all) the aforementioned mental illnesses, then (this part is taken straight from my journal):

All of this is 100% debilitating. No one should have to struggle so much and so often. It's not fair and it's not right. The question is: Are we doing enough to help her? Each time stuff like this happens, and it's happening more and more often, my answer is  No. No we are not.

Is it me, or am I beginning to sound like a broken record?  😒