Validation, But In a Positive Way 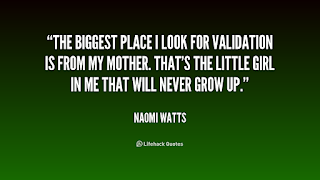 It didn't take me very long to realize that the type of discipline which worked for me, and for many children, didn't seem to be effective with Jordan. I (and the more I learn, the less I take credit for this) had the ability to control myself, to stop crying, and to look ahead and predict the consequences of my actions. After an unpleasant situation, I would try to change my behaviors in order to avoid the conflict from recurring. For instance, if I didn’t want to be sent down a basement again, I realized I needed to calm down and find a way to change my ways. Thankfully, I was able do this.

Jordan, it appeared, did not have these skills to fall back on. It was very difficult for her to calm herself down, and she rarely changed her behavior to avoid the inevitable and repetitive drama, anger, and angst. I guarantee you, if she could have, she would have avoided all of the pain involved. Because if it was torturous for us, it was certainly worse for her

I'm not sure when I tried to explain this dilemma to my dad. I do know that it was around the time when we were struggling to find a diagnosis, or anything that could help us cope, and basically survive. Here's my theory as to why Jordan didn't appear to "learn from her mistakes":  After a traumatic episode, she would block the entire experience out. She would remember nothing about what had happened. I guess it was a subconscious coping mechanism. How can someone learn from a negative situation, if it is completely erased from their memory?

They can't. And they usually don’t.

Sure, I realize this now, but for many years, I assumed she was lying to us. Whenever we asked her what she did and why she did it, she would answer "I don't know", or "I don't remember". I didn't understand how such a bright girl, who had an incredible memory, could forget something that just happened minutes ago. It all seemed rather convenient to me. And it made me angry.

During this conversation with my dad, he told me he did realize that she was very different than I was. He also expressed to me that he wasn't sure how I was able to cope with raising a child with such severe tendencies and emotions. Well, that was the main gist of what I remember.

This was HUGE for me, especially coming from him. It was like everything we were struggling with, and worried about, had been instantly validated. It helped me to realize that what we were up against was big, it was difficult, and it was real.