Shyness or Anxiety, What's the Difference? 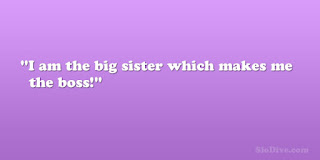 Unless we are out in public. Then you can have the job.

It was funny that when in the confounds of our own comfortable home, Jordan kind of put herself in charge. But if we were outside of our home, it was a very different scenario. Jordan would always push Kayla into a room first, even though she was 19 months younger. Not a hard push, more like a light shove, so Jordan wouldn't be the first to enter into an uncomfortable, unknown.

As the years went on, and we began to let them go up to a counter and buy their own food, Jordan would hand the money to Kayla. And Kayla would pay. I guess it was strange, but it was kind of how it went in our family, and Kayla didn't seem to mind. Although for many years I felt much more comfortable when Kayla went on field trips, or away with other families, than I did with Jordan. We eventually had her work on speaking to adults in the outside world, and acting like the "big sister". It was difficult, and she sometimes got angry at me for pushing.

We still find ourselves in similar situations today, except now I remind her that she is 18. I try to bring it up in a positive way. Something like: "You are 18 and I know you are going to surprise yourself with what you are capable of doing on your own."

Damn, I sure hope I'm right.

One time when we were at a park, a couple of boys told my girls that they were not allowed on the slide. Kayla immediately came back at them, saying they were not their mommy and daddy. so they could go down the slide if they wanted. That's my girl!  Afterwards, Jordan said a similar statement to the boys, but then ran over to me and asked me if it was alright for her to say that to them. It was so cute. I told her that yes, it was definitely okay to stand up for yourselves.

I was just excited that they stood up for one another. Kind of like Team Beck.