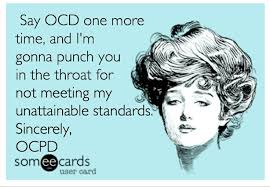 A few posts back I mentioned that Jordan's therapist said Jordan showed textbook signs of having Obsessive Compulsive Disorder (OCD). The national Institute of Mental Health defines OCD as:
In retrospect, I guess I should have titled this entry Diagnosis Dos.

After that therapy session, Adam took it upon himself to do some research. For those of you who don't know Adam, he is very thorough when it comes to research. Beyond thorough. He found information describing Obsessive Compulsive Personality Disorder (OCPD).  Wikipedia defines this as:  (Ready for this?)
What the hell?  Talk about textbook. Here's how my mind interpreted this: Some people will be miserable, bitchy and alone, and because a doctor gave it a name, it's now a mental illness.  Wonderful.

I realize this may be strange, but I actually felt a small sense of relief. Think about it. If this had a name, that meant other people must be afflicted with similar behaviors and tendencies. So we weren't alone. Jordan wasn't alone. It also indicated that perhaps we weren't the cause of her suffering. Typically we didn't blame ourselves or feel responsible, but it was still nice to have some reassurance.

So now Jordan was diagnosed with OCD, GAD, and possibly OCPD??  And how can someone have a personality disorder anyway? It's a personality. It's a person's entire being. How can that be a mental illness?  It was all crap.