Buckle Up and Hang On 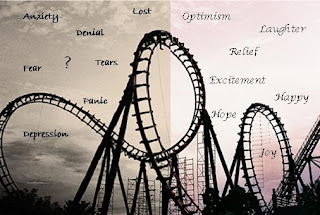 Jordan came downstairs and spoke to us so eloquently about wanting to try out for the school musical. Being the extremely thorough child that she was, she said everything somewhat-overprotective parents (the understatement of the year?) would want to hear. She would give up one day of choir to help free up her schedule, put her "health first", which was, and still is, a highly repetitive Adam-quote, and she would  "make sure that she got a part."     Wait.    What?

I was panicking slightly, because what if she did not get a part?  Regardless, the three of us were able to have a calm, productive conversation. We explained that even if she does the very best she can, and nails the tryout, the ultimate decision is not up to her. Welcome to the world of drama. It appeared this wasn't a surprise, because she said she would still participate even if she got a part in the ensemble.  Phew...

So everything was good... for literally less than two minutes.  Then, right before our eyes, she began to freak out and spiral downward.


What the hell?  As calmly as I could I explained to her that this whole situation was a positive one. We gave you permission to do what you wanted to do. Please don't make us regret our decision. I didn't verbalize my next thought, but if just thinking about being in the musical is giving her this much anxiety, how the hell are we all going to survive the actual show? So yes, I was immediately regretting our decision...

But only for five short minutes. Within those five minutes Jordan ran up to her room, slammed the door, and then proceeded to sit on the floor, wrap her arms around her knees and rock back and forth until she was able to calm down. Then she apologized.  So cool.  That's my girl.

We still had a long way to go, but if I've realized one thing, it's that small steps are huge when it comes to mental illness.